Editorial: Is Industry Ready for the Serialisation Shake-Up?

The regulation few outside of pharma have heard about

Within the next year, pharmaceutical industries in the US and EU will undergo what could be considered one of the greatest regulatory shake-ups in the modern era. Government regulation – coming into force in late 2018 and early 2019 for the US and EU respectively – dictates that all pharmaceuticals be subject to track-and-trace capabilities, also known as serialisation.

The major drive to implement serialisation is the effort to combat the prevalence of counterfeit medication. This is a worldwide issue, with no country remaining untouched, and which has dramatically increased in recent years. This rise has been attributed to a supply and demand effect, driven by the high cost of prescription medicines, making the cheaper counterfeits more attractive, and easy global access made possible through internet sales. But, by its very nature, there are no guarantees the counterfeited medicine taken by a patient contains any active ingredients or that it conforms to the necessary human toxicology regulation. Fundamentally, fake medication is a dangerous alternative. 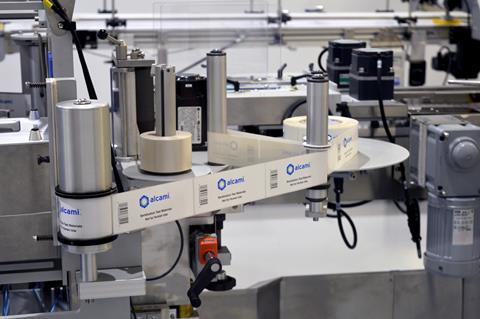 There are many examples where counterfeit drugs have entered official medicine supply chains. In 2012, the US Food & Drug Administration (FDA) had to issue warnings to consumers and healthcare professionals about counterfeited attention deficit hyperactivity disorder (ADHD) medication Adderall that they believed was being purchased through the internet. One year later, the FDA found counterfeit batches of the anticancer drug Altuzan being distributed in the US.

This issue has achieved widespread recognition by the World Health Organisation (WHO) and Interpol, who have raised awareness about the problems associated with counterfeit medicines. Interpol’s Operation Pangea, targeting the illicit sale of online medication, seized a record 25 million medicines worldwide in 2017, a dramatic increase from the 2.4 million seized in 2011.

In developing countries, pharmaceutical counterfeiting is particularly common, with the WHO estimating that 10% of drugs are substandard or falsified. The detrimental effect of counterfeit drugs cannot be understated: the WHO has estimated that substandard and counterfeited malaria vaccinations have resulted in around 116,000 deaths.

To combat counterfeiting, as well as other pharmaceutical supply issues, governments around the world have outlined regulations dictating that drug boxes should be encoded with unique serialised barcodes that enable track-and-trace capabilities. This regulatory shake-up has identified industrial challenges at multiple levels of the drug development supply chain that must be addressed by the whole pharmaceutical industry.

Prior to the enforcement of serialisation, two boxes of medicine would be indistinguishable from one another

Prior to the enforcement of serialisation, two boxes of medicine would be indistinguishable from one another. However, after serialisation has been implemented, this will no longer be the case. Medicines must be encoded with their own unique product identifiers to allow the ability to distinguish between batches and individual saleable units.

Adding further complication to an already complex issue, legislation is different in the US and the EU. Countries such as China, Mexico and Turkey, to name just three, have already adopted some form of serialisation. However, there is no uniform implementation process. Instead, each country has incorporated different regulation, focusing on different aspects of the serialisation procedure.

The direction taken by the US is to provide visibility at all points along the complex supply line, where, between the manufacture of the drug and the patient’s hands, medicines move frequently between different suppliers or distributors. Original guidance by the FDA dictated a deadline of November 2017 for all products to contain this serialised code. However, this has been extended until November 2018 in wake of the ranging industrial challenges, providing industry with more time to prepare. Further legislation that will be implemented in the future will prevent the sale of non-serialised medicines, reducing the risk of counterfeited medicines entering the supply chain.

In the EU, the Falsified Medicine Directive (EUFMD) has dictated an enforcement deadline of February 2019. Furthermore, EU directives are focusing on the enforcement of drug serialisation and verification – ensuring drugs are identical at the point of manufacture and point of sale ­– and less about supply chain monitoring.

The end goal is to maintain the integrity of the pharmaceutical product, and to ultimately prevent counterfeiting

Despite the geographical differences, the end result is ultimately similar: pharmaceutical products will be subject to greater control. The end goal is to maintain the integrity of the pharmaceutical product, and to ultimately prevent counterfeiting. Serialisation is essential to ensure that what the patient is actually taking was intended to be that medicine, containing the essential active components that improve a patient’s health.

Anyone not versed in the pharmaceutical industry might be thinking ‘Why is serialisation implementation so difficult?’ There are a multitude of diverse challenges the industry faces, both economic and technological, that affect a company’s ability to implement the necessary technology to adhere to government regulation both at and beyond deadline day.

First is the cost of buying the necessary equipment. This can involve extensive upfront investment to purchase the brand-new technology required to generate and print the additional serialised code onto packets. Moreover, investment increases for each production line in a manufacturing facility, and the more machinery needed, the larger the investment. 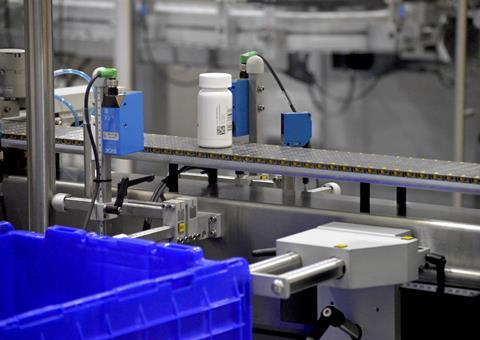 Even following successful integration of machinery into production lines, the software requirements also need to be addressed. In order to provide the ability to track serialised code, unique data must be generated and then seamlessly transferred between a manufacturer and the point of final sale. This places a further burden as software to support this requirement must be in place prior to distribution.

A more overlooked component of serialisation to a lay audience is the impact on packaging and branding. Serialisation is built on the premise of barcoding and tagging. The packaging must therefore be printed to support the necessary tags.

Currently, companies can largely package drugs how they want, with room for branding, package descriptions and company logos. After serialisation is enforced, a larger area of the packet will be needed to support 2D data matrix barcodes. Ultimately, this reduces the area available to advertising product information and could require a time-consuming, costly rebranding.

Serialisation will demand an overhaul or how medicines are stored and transferred, requiring new skills and processes throughout the supply chain

For any new process, operational and software technicians with the appropriate expertise will be required and may be difficult to find. Training existing staff is the next logical alternative but training on new technology has a steep learning curve and can take a considerable amount of time. Furthermore, implementing any new process, especially one as intrusive and extensive as serialisation, could result in internal procedures – such as where medicine is stored and how it is transferred – needing to be completely overhauled.

4. Technical issues must be overcome

As with any process, the technology is undergoing troubleshooting. Technological ‘teething’ issues are being uncovered and solved as they occur, ultimately slowing down the process of serialisation implementation. Technological issues place a larger reliance on machinery and software providers to both overcome any issues arising and train personnel to prevent their recurrence.

There is also the question of data storage. In many countries, legislation dictates that the serialised data must be kept for a number of years, in the event that it is required by governments or other supply chain partners. Companies must therefore be prepared to handle the extremely large volumes of data generated for each product line in a company’s portfolio.

Adding further complication to the issues faced, serialisation implementation must occur in tandem to pharmaceutical manufacture. Production lines cannot simply be shut-down for years at a time to allow a retrofit, because patients need their medicines right now. Instead, companies must work to minimise the impact to patients while also maintaining regulatory compliance. This is no simple task.

While many pharmaceutical companies have adhered to the imposed deadlines, or are ready to, questions remain about the preparedness of the whole industry in introducing the necessary technologies needed to implement serialisation. The key factor is to keep our customers compliant with the relevant regulatory agency they report to, be that EU or FDA requirements. Alcami Packaging Operations understands this complex initiative, and has already completed right-first-time packaging and shipment of serialised commercial batches, ahead of the imposed deadlines.

Serialisation does not depend on size, as regulation affects the whole pharmaceutical industry. The challenges of serialisation implementation, outlined earlier, will impact different sized companies to varying extents. In part, this is due to the different number of drug portfolios offered by small companies and the larger corporations.

The primary challenge encountered by smaller companies is related to the upfront capital cost. Will a company be able to support the upfront cost of the technology or is implementation too expensive? As most small enterprises specialise in a smaller number of pharmaceutical products, less serialisation machinery is needed making the capital required, relative to larger companies, small.

Larger pharmaceutical companies face the exact opposite issues. With metaphorically deeper pockets, these companies are more likely to be able to support the upfront investment. However, generally supporting a larger portfolio of drugs, every production step of each line needs to have serialisation technology implemented. For example, consider some fictional production numbers. Say a company has a portfolio of 20 pharmaceutical drugs, manufactured across five facilities each with 10 packaging lines. This means that 50 lines will need to be enhanced with necessary hardware and software to support serialisation. Not such a small capital investment after all.

Is serialisation worth it?

Unfortunately, the answer is unclear at the moment. The overarching goal of serialisation is to improve patient care, ensuring all medicines obtained through official channels are active medications that effectively combat the diseases they target.

The clear advantage of serialisation is preventing counterfeited medicine from entering the regular medicinal supply line. Serialisation will also enable a more robust simple recall capability. Specific medicines with unique barcodes and batch numbers can be quickly identified and removed from circulation. Furthermore, validation of serialised barcodes is expected to prevent product mix-ups that could have occurred along the lengthy path from manufacturer to patient.

However, the dust is still settling and it will be several years until a new pharmaceutical status quo is established. There are still many unanswered questions surrounding the impact of serialisation. What will deadline day in the US and EU look like? What will happen to non-serialised medicines already in the supply? What will happen to pharmaceutical companies not yet prepared for serialisation? These questions are, as of now, open-ended. It will take several years before the complete tale of serialisation can be told.

At Alcami, the health of our workers is not taken lightly. Rooted in the foundation of The Alcami...

Blog: Staying Ahead of OSD Challenges

According to the Food and Drug Administration and the Orphan Drug Designation program, orphan...