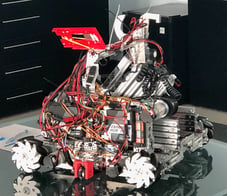 Alcami continues to make science, technology, engineering, and mathematics (STEM) education and training initiatives a priority in 2019, this time partnering with Homestead High School in Mequon, Wisconsin, to support the school’s growing robotics club. The company has agreed to sponsor Homestead’s 2019 competitions and demonstrations, which will help its club purchase new computers and 3D printers. On average, teams invest approximately $4,000 to build a robot from the ground up and participate in competitions. 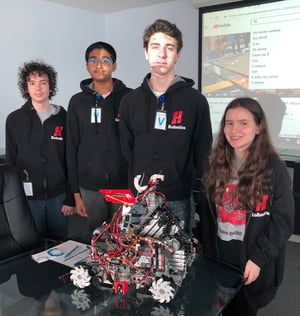 Kraken Pinion has set out to improve on their previous achievements at the FIRST Tech Challenge (FTC) World Championship robotics competition, while adding new team members to continue to make their club more successful. At the most recent tournament, the team went undefeated in qualifying rounds and narrowly missed playing for the title in the finals. Due to their professionalism, enthusiasm, and creatively engineered robot, Kraken Pinion was named a finalist for the FIRST Inspire Award, a high honor granted to only five out of 7,000 teams in the world.

In April, members of the club visited Alcami’s Germantown, Wisconsin Center of Excellence for active pharmaceutical ingredient (API) development, scale-up, and commercialization to demonstrate their inventive, fast-moving robots. The students also engaged with Alcami scientific experts in discussions about their successes and challenges, learned more about STEM career options, and received an introduction to the world of API development and manufacturing.